Vitamin A supplementation (VAS) programs targeted at children aged 6–59 months are implemented in many countries. By improving immune function, vitamin A (VA) reduces mortality associated with measles, diarrhea, and other illnesses. There is currently a debate regarding the relevance of VAS, but amidst the debate, researchers acknowledge that the majority of nationally-representative data on VA status is outdated. To address this data gap and contribute to the debate, we examined data from 82 countries implementing VAS programs, identified other VA programs, and assessed the recentness of national VA deficiency (VAD) data. We found that two-thirds of the countries explored either have no VAD data or data that were >10 years old (i.e., measured before 2006), which included twenty countries with VAS coverage ≥70%. Fifty-one VAS programs were implemented in parallel with at least one other VA intervention, and of these, 27 countries either had no VAD data or data collected in 2005 or earlier. To fill these gaps in VAD data, countries implementing VAS and other VA interventions should measure VA status in children at least every 10 years. At the same time, the coverage of VA interventions can also be measured. We identified three countries that have scaled down VAS, but given the lack of VA deficiency data, this would be a premature undertaking in most countries without appropriate status assessment. While the global debate about VAS is important, more attention should be directed towards individual countries where programmatic decisions are made. 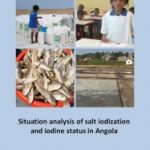 Determinants of stunting, wasting and anemia in Guinea and assessment of nutritional response during the Ebola outbreak in Guinea and Sierra Leone

Assessing the Coverage of Biofortified Foods: Development and Testing of Methods and Indicators in Musanze, Rwanda

National Prevalence of Micronutrient Deficiencies, Anaemia, Genetic Blood Disorders and Over- and Undernutrition in Omani Women of Reproductive Age and Preschool Children